Barrel Break-In: Does It Really Matter?

There are no shortage of controversial topics in the firearm industry. Much like the classic “9mm vs. 45 ACP” and “AR vs. AK” debates, it seems like many shooters have a very strong opinion on the subject of barrel break-in. While the discussion tied to barrel break-in is normally tied to the effective management of copper fouling building up in the lands and grooves of your rifling, there are a number of other influences that may dictate your barrel’s natural “break-in process”. It’s not unusual to see a slight increase of velocity over the first few hundred rounds of a barrel’s life. It’s also common to see a slight reduction in group size after sending a few rounds through a new barrel. This phenomenon proved to be readily apparent during a recent range trip with one of our shop test rifles, a build that was specifically designed to replicate a practical field rifle setup carried by an amateur shooter engaging a paper target at a distance of 100 yards.

In an optimal load testing environment, we would mount a barrel to a custom action bolted to a test fixture placed in climate controlled conditions, firing hand-loaded ammunition tailored to that specific barrel. While this approach may provide a better reflection of a rifle barrel’s true performance capability, its value in a field environment is somewhat limited. For this reason, we had our local gunsmith construct our own “field rifle” designed to reflect parts and accessories commonly seen at your local rifle range.

The barrel used for this initial round of testing was machined from one of our 500 Series single-point cut rifled blanks. Featuring a hand-lapped 4R rifled bore, this particular Vortakt barrel is profiled to an M24 contour and a 1:7.5 twist rate. The chamber was reamed from a SAAMI spec 6mm Creedmoor reamer, set +.002 over minimum SAAMI headspace specifications. 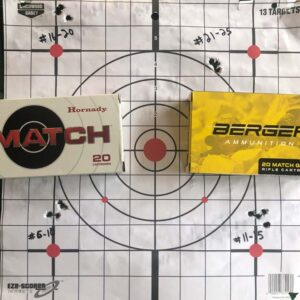 For our initial break-in testing we utilized two common factory loads from Hornady and Berger. The Hornady Match factory load features their 108gr. ELD bullet, while the Berger factory load showcases their 105gr. Hybrid Match bullet design. The rifle was supported from the bipod and a rear bag, fired at a paper target set up at 100 yards. Rounds 1-5 through the barrel were used for preliminary sight-in, and were not measured for group size. The initial five rounds fired for group size (rounds #6-10) measured in at .62 MOA using the Hornady ELD Match load, followed by another five-round group using the Berger 105 gr. Hybrid Target load (rounds #11-15). Once this first group of Berger factory ammunition was fired, we cleaned the bore with a few patches of Hoppe’s #9 to remove residual carbon fouling. The patches did not come out blue, and a quick inspection determined that no copper fouling was visible.

Rounds #16-20 were fired with the Hornady ammunition, demonstrating a slight decrease in group size when compared with the initial five-round group. Once again we cleaned the bore with a few patches of Hoppe’s #9, this time firing a five-round group with the Berger factory load. This final five-round group (rounds #21-25) provided us with a .38 MOA group, the tightest fired during this range session.

While the results of this test may be anecdotal in nature, early indications point to a gradual break-in of the barrel over the first 25 rounds, with group size further improved by leveraging a light break-in process. This correlates with past results achieved using a similar approach to barrel break-in.

Now that a baseline of practical precision has been achieved with our practical test rifle build, future tests will involve a similar break-in test utilizing 300 and 400 Series barrels in order to identify a correlation between multiple samples.

Once this test is replicated with those two additional barrels, further testing will be carried out in a test fixture shooting both factory match and hand-loaded ammunition. This additional test will provide us with a better reference of the precision potential for each of the Barrel Performance Series product lines.